Wait, I thought the fuckboy was exclusive to dating/hook-up culture!

Hey, me too. Until recently, while advising someone through their own friend troubles, when I realized this term can apply to friendship, too. It’s not quite the “fair-weather friend,” or the “party buddy,” but rather, someone who wants a close friendship without actually putting in much effort. And that’s when it occurred to me, “Hey… this is the friendship equivalent of fuckboy behavior.”

I actually did some fun research for this post, which mostly meant surfing Buzzfeed for funny articles full of GIFs and UrbanDictionary for all the sassiest definitions. Also, Thought Catalog, because ThoughtCatalog rocks, and because this article links fuckboys to Aristotle.

In case you’re somehow unclear on what a “fuckboy” is, here are some UrbanDictionary bests to get us all on the same page:

The fuckiest of the fucks

These fuckboys need to not 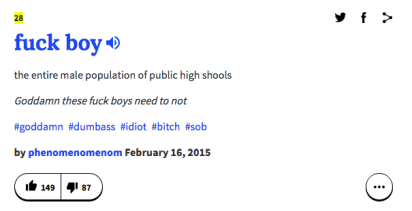 Pisses off everyone on earth

While I’m not 100% on board with every definition, we now have a similar working concept. If you feel like getting really doom and gloom about the current state of dating, this Vanity Fair article hits it spot on (please prepare your feels accordingly). Now, what the hell is a Friendship Fuckboy?

A rather inconspicuous species, the Fuckboy Friend involves your standard “fuckface” setup, where one party is committed and clearly cares, while the other party probably has feels on some level, but you’re never quite sure what that means. They insist they care, they will “scream it from the rooftops…” but then… the action doesn’t follow.

This is someone who wants the benefits of best friendship: overjoyed when you see each other, feeling like someone in the world gives a genuine shit about the mundane details of your life, someone you know you can always count on no matter what happens or how much time lapses… but this person also cannot be bothered to be inconvenienced by the effort it takes to make a friendship that strong.

As with any other relationship, a best friendship requires work. You gotta put in the time and the effort, and while it’s different in every scenario, you have to get on the same page about what constitutes the friendship you’re wanting, and what that looks like for it to be worth your time.

You’re always going to give a shit when you shouldn’t; it’s part of the human condition. As a good friend recently reminded me during a tough time of my own (with an actual fuckboy LOL), “How did this become even remotely your fault? You did what literally any other human being would do. You’re a good person. I don’t know how you can come to the conclusion that it’s you. Everything points to him being a shitty person.” Sometimes, for those of us prone to “Giving a Shit” syndrome, shitty outcomes make us second-guess if we’re to blame. The person I advised about their friendship problems had the same fears.

Ultimately, advice for Fuckboy Friends is the same as for Full-Fledged Fuckboys: If you’re not on the same page if someone won’t stop bullshitting around, or actions and words don’t make sense together, roll out the red carpet of boundaries and expectations. If that’s already been done, explain why you’re over it, and peace the fuck out.

Because it is. How many conversations really change someone’s willingness to alter their core “give-a-shits?” Sometimes, maybe. But often, that’s a temporary band-aid. Someone who genuinely finds you important and necessary to their lives will suck it up, throw on their We Can Do It bandana, and muscle up to the task. Anyone else… well, they’re probably just full of astronomical bitchassness, and ain’t nobody got an orbit big enough to house that floating garbage.

Spend your fucks on people who make them worth giving. Date your good friends, like I did in this post. Does wonders for perspective and the soul feels.

There was an error retrieving images from Instagram. An attempt will be remade in a few minutes.