Kay, so, I’mma start this one by being incredibly real: I never expected nannying to teach me so much about the human condition or to reveal adult problems to me in such an oversimplified way. But whoa. The things I saw and learned.

And because I’m a writer, I will now bestow them unto you because knowledge is fun, and also because the psychology nerd in me is obsessed with the way people behave and why they do it.

I picked up on this first: When children apologize to each other, sometimes their apology for whatever asshole thing they definitely deliberately did is met with, “I don’t want a sorry!”

I thought about this and realized that sentiment is actually kind of an appropriate response. Maybe a bit tactless, but it’s not entirely unfounded. Think about it: Someone just shit on you intentionally, and you can tell, so you’re not having some BS half-assed apology. Yet we teach children early on to say that “it’s okay” when someone hurts them when often it isn’t okay. We normalize inconsiderate behavior while teaching children to waive the right to stand up for themselves and their fair treatment. Um, what?

A better approach? Apologies can be met with any variation of the following:

You don’t have to say it’s okay when it isn’t.

Sharing Sucks, Unless You’re the One Without the Thing

Some of us get better at this as we grow, and some are naturally dispositioned to being good at giving. Most of us, though, are greedy little misers who really don’t want to let another turdface put their grimy paws all over our beloved precious.

So when we don’t have it, we really want it. We believe, “You should share that with me because XYZ,” but when we have it, sharing no longer is a good idea. Take that, apply it to any grown-up situation, and there’s an interesting overlap.

Actually, No One Is Right

This is my favorite because it was such a revelation when I put it together. I watched two kids argue about something so stupid I don’t even remember what it was. Both had hurt feelings because of the way they chose to communicate their feelings. Both intentionally tried to make the other feel bad. And guess what happened? Both succeeded.

Their whole goal of the argument was to convince the other that one was right and the other wrong, but all they achieved were hurt feelings and unhappiness.

As an observer, I noticed something that happens in adult disagreements, too: Both sides were right, and both sides were wrong. But, as in the adult world, both sides were convinced that someone had to be right so that they could “win the argument,” and as a result, everyone lost.

There’s a piece of art that I stumbled across on social media shortly after I watched this unfold that illustrates a similar circumstance. 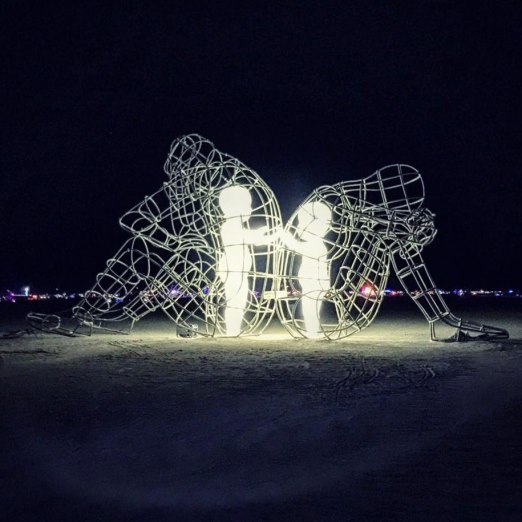 Artist Alexander Milov created this piece for Burning Man with a description stating the following:

“LOVE demonstrates a conflict between a man and a woman as well as the outer and inner expression of human nature. The figures of the protagonists are made in the form of big metal cages, where their inner selves are captivated. Their inner selves are executed in the form of transparent children, who are holding out their hands through the grating. As it’s getting dark (night falls) the children chart (sic) to shine. This shining is a symbol of purity and sincerity that brings people together and gives a chance of making up when the dark time arrives.”

The stubbornness of adults on the outside while the inner child longs to connect with the other resonated with me in a deep way. Watch children disagree. They may be angry and hurt, but ultimately, they seek resolution, finding a way to trust the other, to connect. Children may be mad for a while, but find me a child who holds a grudge. I’m not suggesting it doesn’t exist, I’m conjecturing that it’s rare. Eventually, children drop the anger and the hurt.

Take something a child loves in response to bad behavior. Tell them no to something they really want. Put them in their room when they throw a fit (this one I had lots of practice with). From my experience – and I only nannied for one family, so take it with a grain of salt – usually the child calms down when removed from the situation, and when they come back downstairs (usually after a much-needed nap), they’re loving and apologetic. They want to sit on your lap or play together or spend time.

Granted, the dynamics between nanny and child are different than the dynamics among peers. But there, I also observed forgiveness and reconciliation. Not always immediately, but eventually, the hard feelings were dropped and both parties moved forward.

Next time you’re around small children, watch. Maybe we need to take a page out of their book where kindness, compassion, and forgiveness are concerned.

One thought on “Education of a Nanny”